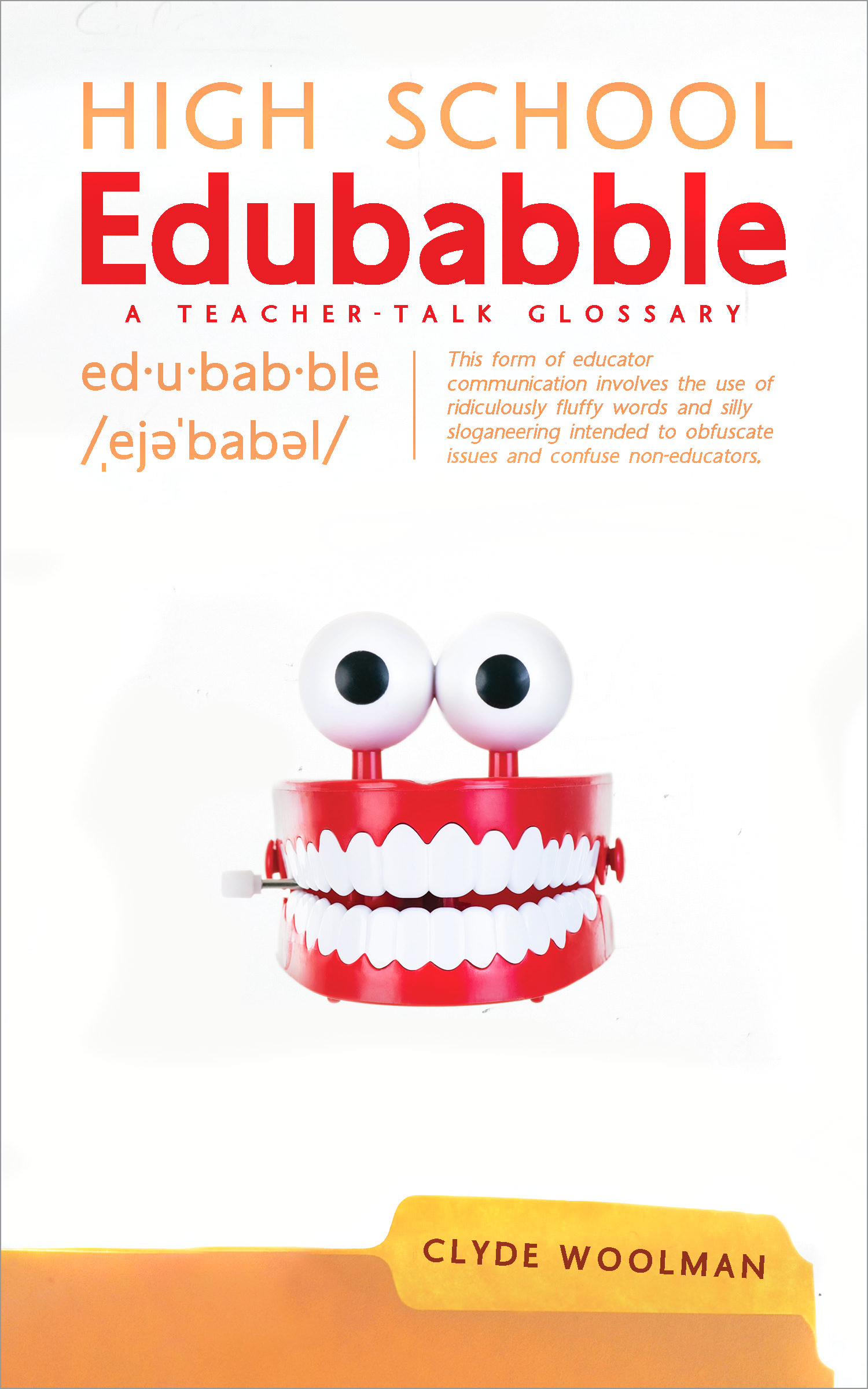 “Every page will elicit a chuckle or two, if not outright laughter. Woolman gives us a touch of education reality through the vehicle of humor.” Roy Londry – High School Teacher.

“A charming and funny introduction to the world inhabited by students, teachers, and administrators. I thoroughly enjoyed it.” Nancy Cox – High School Teacher.

Relentless Jargon, a Quirky System, and a Goldmine for Satire

The seemingly unending tsunami of fluffy education sloganeering prompts this follow-up glossary, specifically geared to high school. Descriptions of Action Research, Capstone Learning, Experiential Learning, Meta-Cognition, and Oracy, among others, are examples of jargon that are ripe for satire.

High School as a Unique Workplace / Teens as Strange Schoolmates

There is no profession like teaching and no workplace like a high school, filled with the angst, passion, and zany antics of adolescents. The descriptions of the quirks and foibles of students, teachers, principals, and parents form a significant portion of the glossary. A few examples of such entries are Drones, First Day Fashion, Grad Hug, Juul, Plagiarism, Restroom Graffiti, and Vacation Servant.

It would be ridiculous for a satirical work such as this to not contain a thread pertaining to the impact of technology on teachers and students. Unlike previous generations, today’s teachers face tech-addled youth who are drowning in a churning sea of information, much of it of dubious quality. Fortunately, some humor can be found in descriptions of Digital Citizenship, Fortnite, Monks of the Digital Age, Screen Addicts, and Virtual Field Trip.

The Decline of Ethical Standards

Schools do not operate in a vacuum. It is difficult for teachers to maintain standards of truth-telling, respectful discourse, and the use of facts over bluster in their students when such behavior appears to be absent from many societal leaders. There are several listings that make comment on this dichotomy between behavior expected and that witnessed. Anti-Educators, Ethical Standards, Journalism, Talking Heads, and Weapons of Mass Distortion are examples.

ACTING
An excellent confidence-booster and form of self-expression for young people, this subject may not have realized its full potential. Skills that acting hones can be useful in politics and business. Politicians need to exude understanding even when they are clueless about an issue. They may be expected to ooze compassion when they really don’t give a hoot or emit gravitas when they would rather be in a bar enjoying a scotch and soda. Business CEO’s have to evoke integrity when responding to evidence that the product they foisted on consumers is knowingly defective. Acting ability is a core skill for the powerful in the visual-oriented world of the 24/7 news cycle; see also, Congress, Ethical Standards, Improvisation.

BALANCED BAND
Most students entering a high school beginner band want to play the sax, guitar, flute, or drums. Someone has to play the tuba or euphonium, and it is the teacher who has to make the decision. This teacher “intervention” flies in the face of the education world’s move to self-directed, choice learning. A band is not made up solely of sax players but that’s what it might look like if the teacher allowed students to determine how their personalized learning was to proceed. How band teachers manage to build a relatively balanced band in an era of student choice is a notable feat that goes largely unnoticed; see also, Auditions, Euphonium, Heutagogy, Mason.

DISTRIBUTED LEADERSHIP
This is good edubabble since it appears to link with flat hierarchies and teacher empowerment. The positive interpretation of this activity is that the leader is confident and trusting enough to leave the work in the hands of others by constantly delegating. Of course, there is another interpretation. The leader may be incompetent, lazy, or both; see also, Flat Hierarchies.

FROG DISSECTIONS
The most common animal used in science dissections is the frog. And while the practice is becoming more controversial, the activity remains a staple in most biology classrooms. But why the frog? Science teachers will explain that the organs in a frog and the way they are laid out are similar enough to humans to provide insight into how the human body functions. That in itself is a bit worrisome to laypeople who likely never considered their innards akin to that of a little reptile. There are practical reasons as well. The frog is abundant and relatively small. Animals such as sea lions are difficult to catch and there is limited storage space for thirty of these or like-sized animals. The frog also has a short life span, so perhaps the rationale is something akin to, “What the hell, they’re going to die soon anyway.” To be totally unscientific and at the risk of body-shaming the poor creature, frogs are not that appealing. If they were cute and fuzzy, they would have a far better chance of escaping the thrusts and cuts of scalpel-wielding students. That role would fall to some other unfortunate creature not blessed with a cuddly body and good looks; see also, Body Shaming.

NAMES AND TITLES - SCIENCE
A nifty title can add a lot of grandeur to a name and sticking the word science to the end must provide a measure of gravitas. Initially there was the Social Sciences, followed by Animal Science and Managerial Science. In the 1980s Computer Science was added. Now there is Custodial Science, Consumer Science, and Learning Science. What’s next? Borrowing from contemporary politicians and “news” outlets, does the study of English become Fictional Science and Drama renamed, Theatrical Science? see also, FACSE, Journal of Learning Sciences, Library Science, Management Science.

SCREEN ADDICTS
A blank expression, unblinking eyes, seemingly defective ears, calloused thumb tips—these are some of the characteristics of a new type of student junkie, those addicted to their screens. Unlike other junkies who have to search for their high, the screen addict usually has what he or she needs in hand. Thus, serenity and equanimity are the norm. The screen addicts do share a common behavioral bond with their junkie brethren if the fix is removed. Whining, snorting, and snarling will occur. There may even be some negative physical reactions. Teachers who intend to confiscate tech devices from these junkies should exercise caution; see also, Fortnite, Textbook, Thumb Tapping, World Cup of Fortnite, Zoned Out.

VACATION SERVANT
Mom and dad have decided to take the family to Mexico in the middle of February for two weeks. The adults will devour inexpensive food and beer. The kids will be boogie-boarding and lolling around on the beach. The parents expect the teacher to concoct a series of projects for the students so they can keep up with their schoolwork. There is only a miniscule chance any of the work will be done. When the student returns home, smiling and tanned, the parents will expect the teacher to develop another set of work since the class has “moved on” while they were on vacation. Time will be required for the students to complete the new work. The teen will need to “catch-up” and it is the teacher’s responsibility to assist with extra tutoring. Is it any wonder that the teacher feels as much of a servant as those who brought the parents the beer on that distant sunny beach?

WEBSITE PROJECT
Assigning a task to develop a website is a sound educational project for a Graphic Design or Computer Technology course. A little tinkering can add a touch of Art History and make the project really interesting. Have students investigate a famous artist and then imagine and design a website that the artist would have likely fashioned.

The students will have many artists to choose from as well as a variety of eras and styles. The student(s) who choose Salvador Dali will have made one of the most intriguing choices. His unusually long, thin mustache, flamboyant personality, eccentric manner, and knack for self-promotion would be fascinating to many high school students. His prolific career, dominated by surreal images, adds much to the mystique.