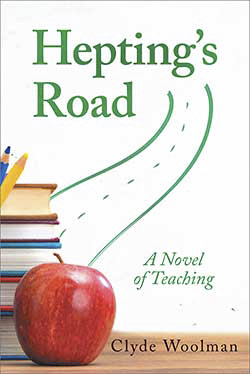 Hepting's Road : A Novel of Teaching

“The characters are so believable and the daily experiences funny. Woolman has really nailed the education system in this novel.”
Allan Douglas – Director of Instruction – Elementary.

“Woolman weaves the human dynamic of the economic reality of the school system with the capers and magic of life in the classroom.”
Jill Peacocke – High School English Teacher.

Steve Hepting is a man to be admired. From an impoverished background he achieves financial success as a turn of the millennium stock broker; only to implode financially and romantically in the tech bust in 2001-02. In need of a paycheck, Steve is unexpectedly selected for a teaching position. Working through his second year in 2005, he survives comedic classroom stumbles, mentors Frank “Tiny” Little, a slow-witted football star, and fawns over an attractive, coquettish colleague.

True to his system-fighting roots, Hepting tangles with the domineering, data-diva principal, Jennifer Capelli. Her subterfuge results in a mid-year transfer to an elementary school, a position for which Hepting is untrained and unskilled.

Finding teaching too much work for too little pay, Hepting accepts an offer to return to the financial industry, only to be manipulated by the unethical leader of the investment firm.

With romance stalled and career aspirations thwarted, Hepting requires a rethink of what is important to him. He becomes energized by student enthusiasm for an international aid project. The surprisingly astute advice he receives from his former student, the academically challenged Tiny Little, helps him finally realize that after travelling along a serpentine, and at times arduous road, teaching is the passion that fuels him.

“Woolman has painted a true picture of school life. I can clearly relate to this amusing story that deals with interpersonal relationships in and outside of school. A good read!” Phil Maund – Middle School Teacher and Principal.

Hepting's Road is available online from the following distributors: